Ikie was stabbed for being hungry

IKIE WAS STABBED FOR BEING HUNGRY…

This tragic case comes to us from Bangkok Rescuer @Unnruenan Nutsati (Amy).

This is Ikie. He is a stray who lives in one of the areas where Amy regularly feeds dogs on the streets of Bangkok.

Ike has has no home to go to, no shade to hide from the sun, no roof to lay under at night. He searches for food in garbage bins which are often in front of people’s houses and we believe someone spotted him searching the bins and punished Ikie by attacking him (almost fatally) with a knife.

When Amy arrived in this street to fed the dogs, Ikie came running out to Amy, desperate for food and to show her his terrible wound. Amy immediately saw the extent of the wound and rushed Ikie to a vet nearby.

The vet confirmed it was caused by a sharp cut from knife or something similar in his stomach and in his hind leg. The cuts were very deep. He had lost a lot of blood and was in great pain.

Ikie was so pale & aenemic from blood loss, that it was not safe to give him anesthetic in order to perform the operation to properly clean & close the wound, as in this condition he could stop breathing whilst anethesetised. So instead the vet decided to treat Ikie with strong pain killers, antibiotics and other open wound treatments.

Ikie is slowly recovering but Amy does not think it will be safe to take Ikie back to the street once he’s healed. If an attack like this this happens again, the next wound could kill him.

Amy says “he is a very sweet Thai dog. I cannot think of any reason why he deserved such a barbaric punishment”.

We’d like to raise $300 to pay for Ikie’s vet treatment & medications. Without Amy’s intervention, Ikie would have died in terrible pain on the streets of Bangkok.

Please help if you can, any donation however small will be so appreciated.
Thank you x 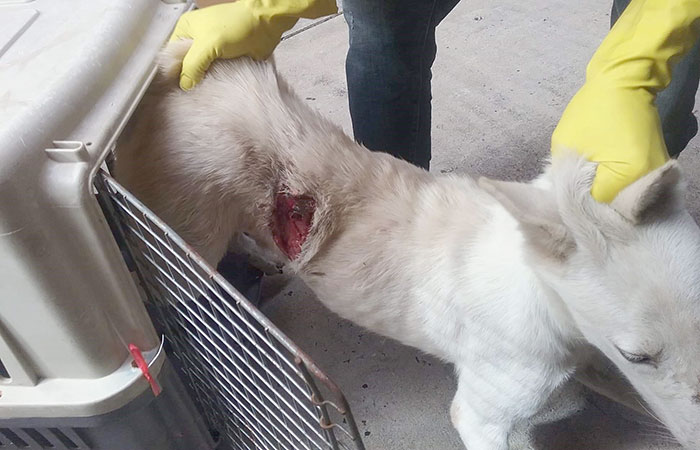 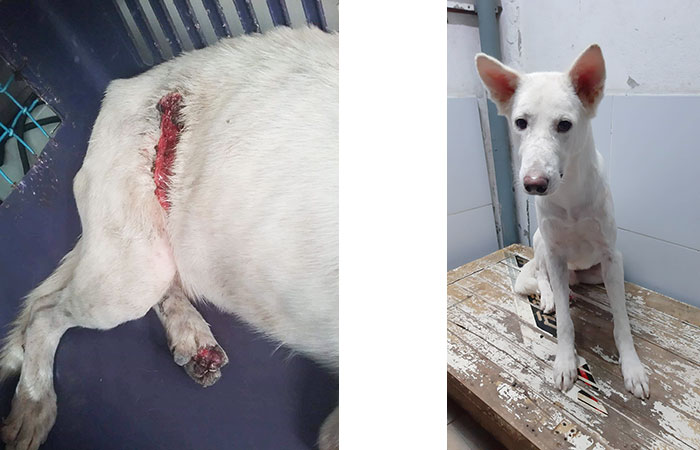