What happened to Wildo?

WHAT HAPPENED TO WILDO? – IT LOOKS LIKE HIS HEAD EXPLODED!…

Wildo is part of a wild pack of dogs, that live just outside the town area of Hua Hin, Thailand. “Hin Lek Fai Rescue” regularly feed these dogs and know the dogs well.

Wildo had not been coming for his food recently & when he finally made an appearance last week, he was suffering terribly from an horrific head injury. His head is so infected that at one point when he shook his head, puss would fly around him! We are not sure if this injury was caused by humans or a dog fight & will likely never know.

The rescuers tried to trap Wildo into a cage, but he is very wary of people and would not enter the cage. So they had no other alternative but to dart him, so that they could catch & treat him. If this injury was not attended to, Wildo would continue to suffer immense pain & eventually die from the infection. Thankfully the darting was successful and Wildo was captured.

Being a feral dog, Wildo will need to be treated in one go, as it will be too difficult to catch him again. He is not aggressive, just afraid of people & for good reason.

The rescuers know that many local people were aware of Wildo’s injury but feral dogs in Thailand are considered even less worthy of care than the street dogs. No-one helped the rescuers to capture Wildo & some were even shouting at the rescue team to “let him die”, whilst they were trying to capture him. So very sad!

Wildo will need intensive veterinary care to mend this wound on his head & he’ll need to stay at the vet whilst this is in progress. We’re therefore trying to raise $500 to treat Wildo & remove his pain and suffering. Please help us do that! These dogs sadly have no-one else to care for them.

Any donation however small will help Wildo. Thank you x

Wildo shortly before being captured 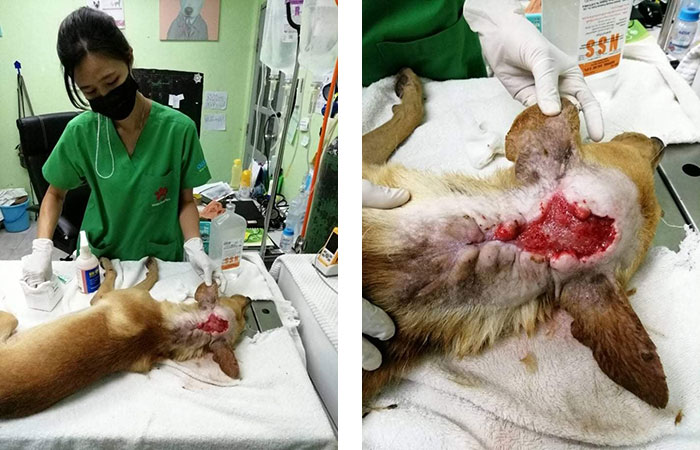 Wildo starting to undergo treatment at the vet