This does not mean we cut corners, the dogs are in experienced safe hands.

Reduce the number of street dogs saving  lots of suffering, many of the puppies born on the street do not survive & if they do, life can be very hard. Preventing all the unwanted litters is the best way to improve the lives of stray animals.

There is little money around to do this work so a cost effective solution has to be used. The SNIP program has developed a safe & inexpensive method to “Capture, Neuter & Release” (CNR). Where possible the dogs are picked up by the local carers that the dogs know & trust thereby reducing stress to them.  Some very shy dogs may need darting, this is done with a blowpipe loaded with a special syringe containing a tranquilising drug. 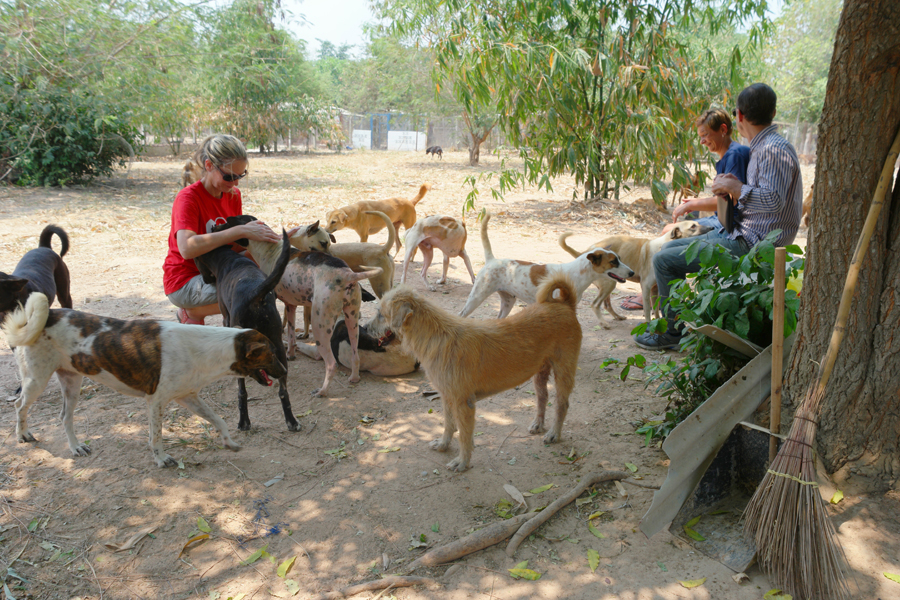 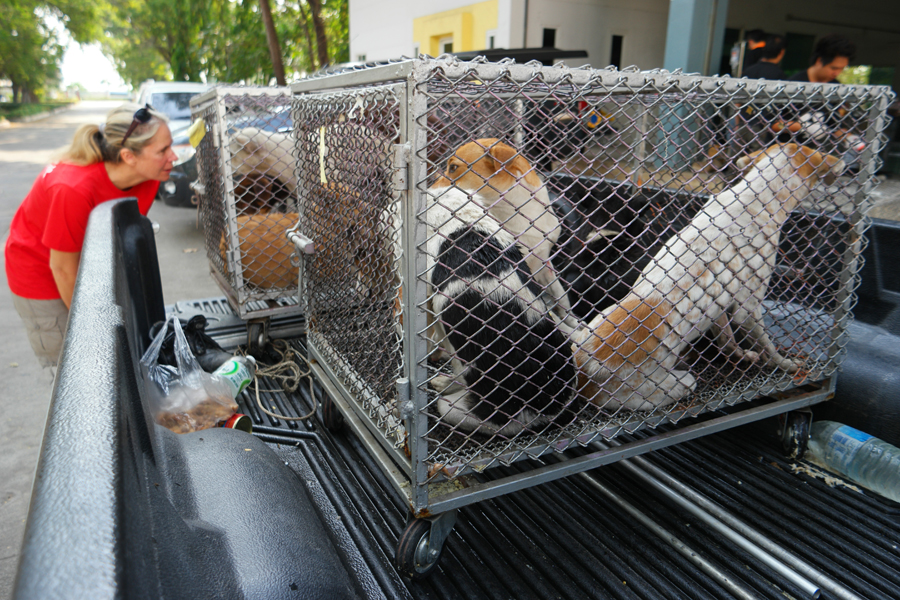 Once caged the dogs are checked over for any visable signs of wounds or illness prior to their operation. We look for any signs of TVT tumours (venereal cancer) & Pyometra, inflammation of the uterus often caused in Thailand by hormone injections used as a cheap form of contraception. The dog is then weighed to calculate the amount of anaesthesia require to undergo the operation. 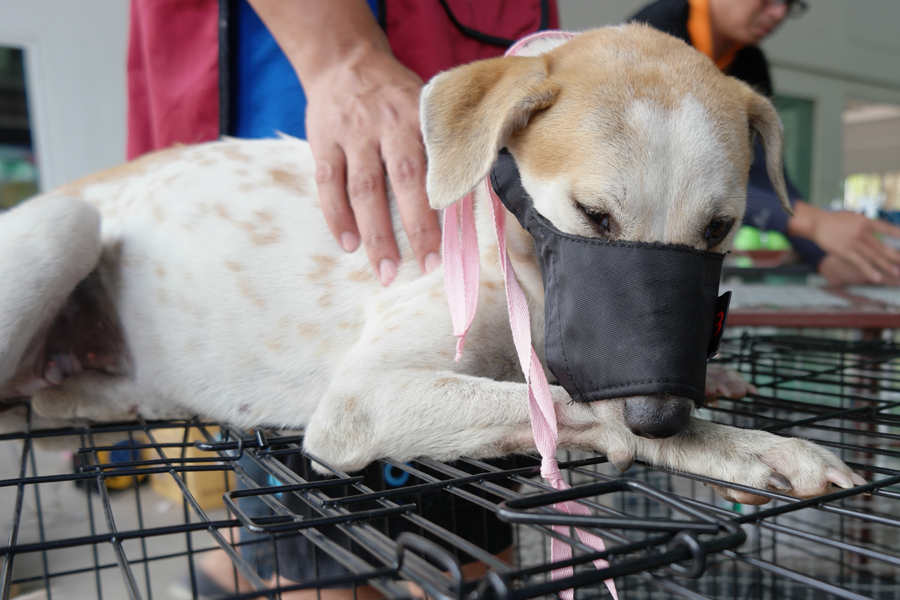 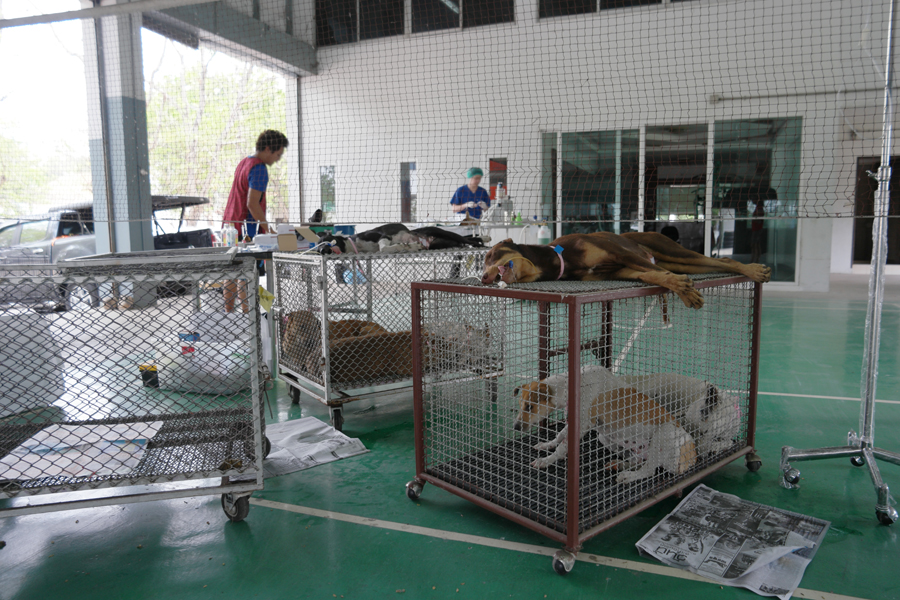 The mobile clinic is set up in a school grounds or temple complex etc & the dogs are brought in already caged. A pre-med is given to calm the dog down before the anaesthesia is given. After sedation the operation site needs to be shaved, to prevent infection. A large area is shaved & well disinfected so the wound is far easier to keep clean & less likely to cause problems afterwards. 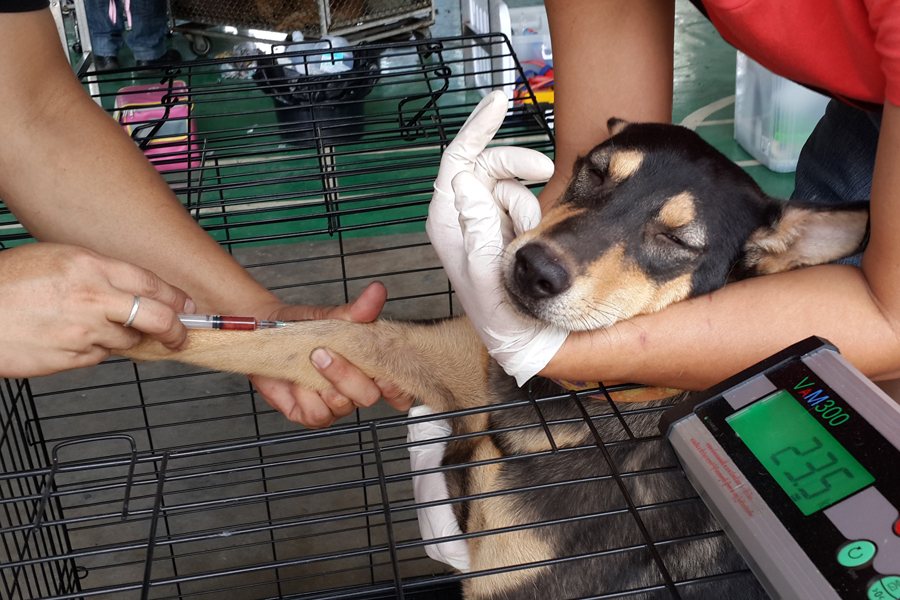 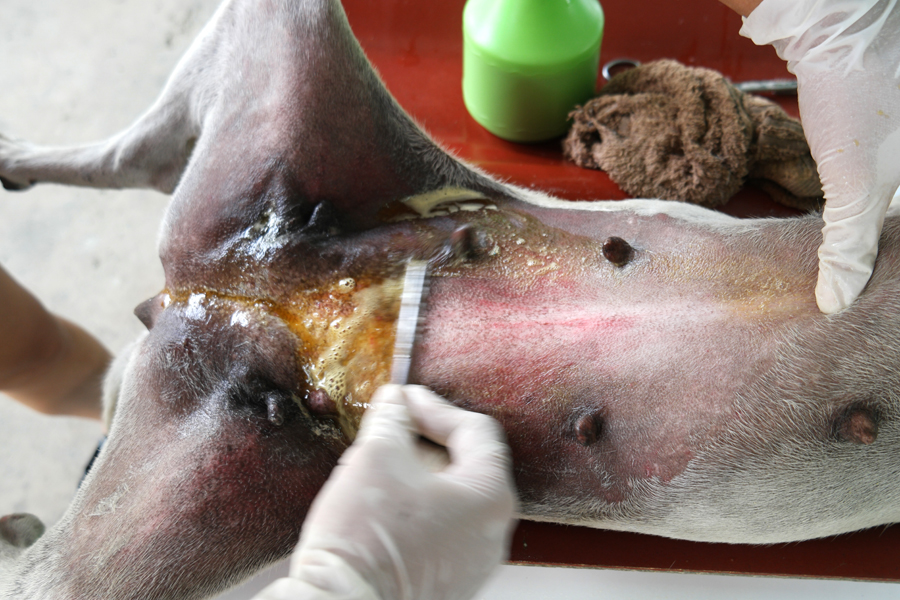 They then quickly insert a breathing tube so the dogs respiration can be controlled during the procedure. While the dog is being shaved it receives injections against common infection like Rabies, Canine Distemper, Infectious Canine Hepatitis, Canine Parvovirus & Leptospirosis. A shot of Ivermectin to kill any fleas or ticks, a pain relief jab & finally a long lasting antibiotic to prevent infection of the wound.  Lastly a tattoo is made in each ear to signify that the dog has been sterilised. 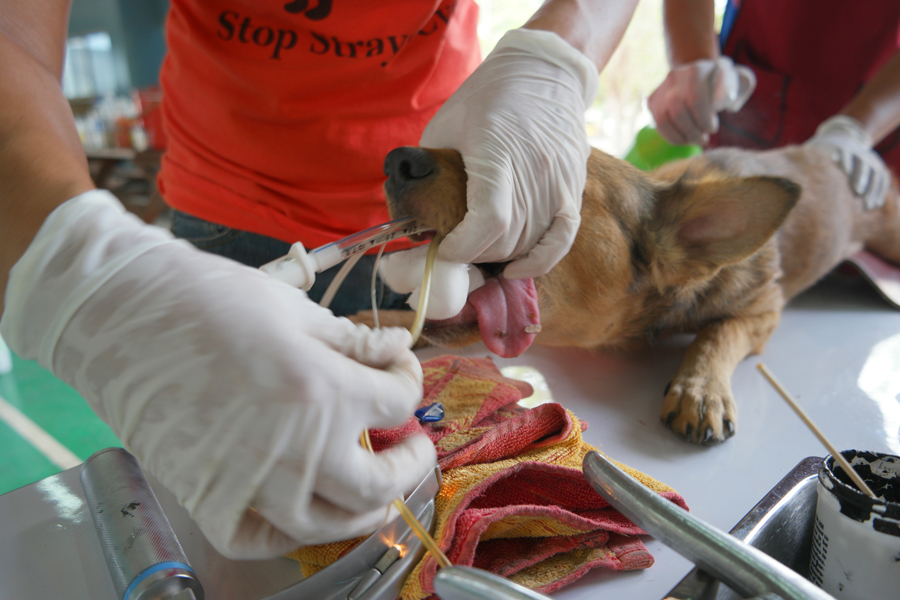 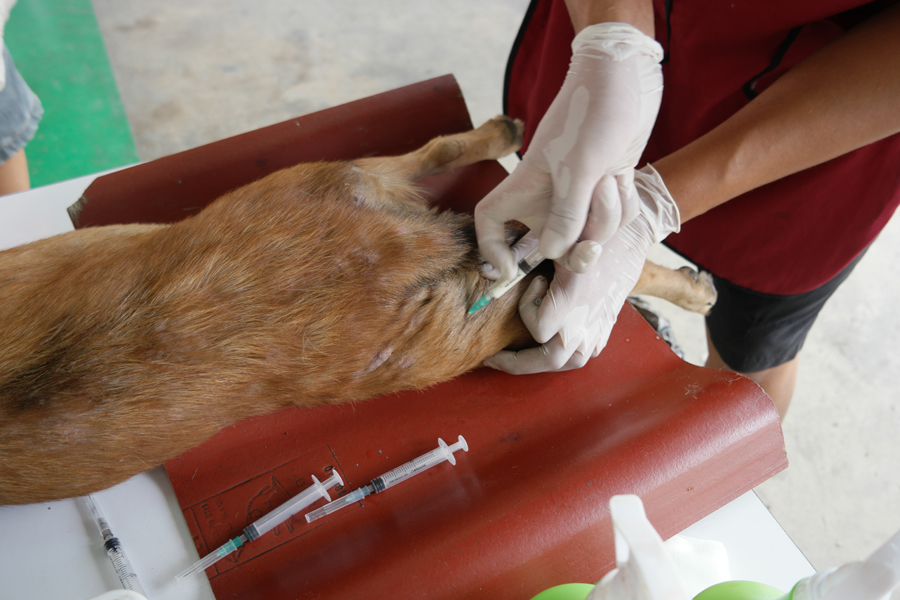 The dog is then handed over to the vet where it is hooked up to a breath monitor, heart rate & oxygen level monitor to ensure it’s safety during the operation. The breathing tub is connected to a gas anaesthesia machine which controls the level of sedation during the procedure. The SNIP technique is to make a central incision about 2cms long, this reduces the wound size which means less stitches & a lower risk of pre-op infection. For every operation a new sterile pack is used containing a drape, sterile swabs & all the instruments the vet will need, this ensure there will be no cross contamination. All instruments are cleaned & autoclaved after each use. 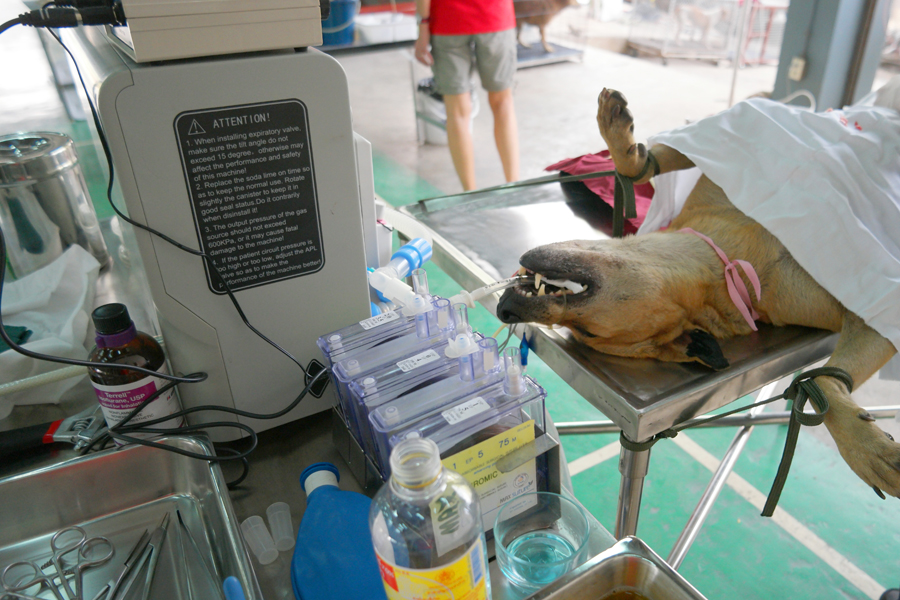 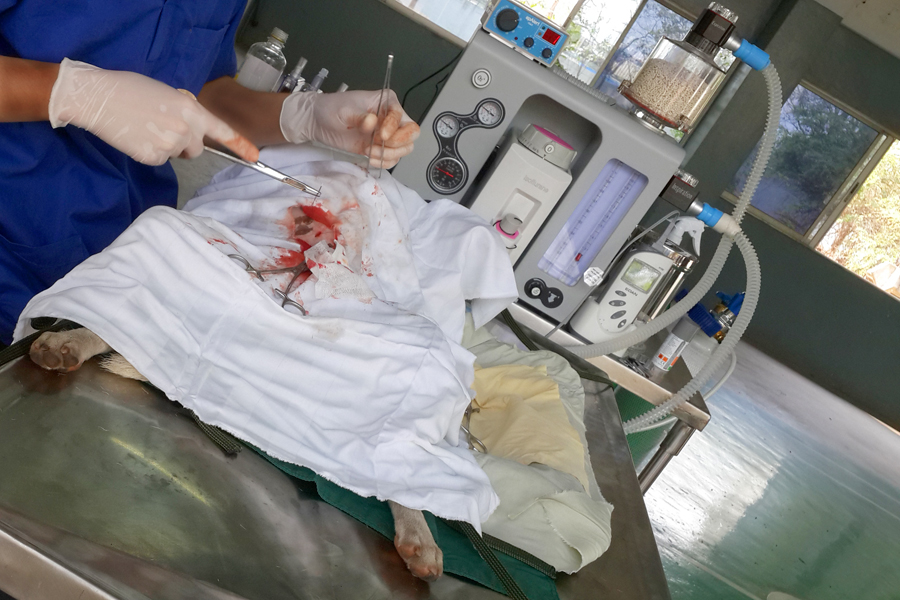 The operation on a female dog takes around 15 minutes, male dog can take a little less. If a female dog is found to be suffering from Pyometra (common in Thailand) then the operation is longer & it is her lucky day as most street dogs will die a painful death of this infection. The best cure for Pyometra is removal of the uterus. All the stitches used during the operation are dissolvable so no removal is required at a later date. The wound is stitched closed  & sprayed with OPSITE a water resistant film & covered with a thin very adhesive plaster that protect the wound but allows it to breath without causing discomfort. This will drop off in around 5-6 days once the wound has healed, & allows for the dog to be returned to its location the same day. The incident of pre-op problems with this type of Spey operation is very low less than 2%. 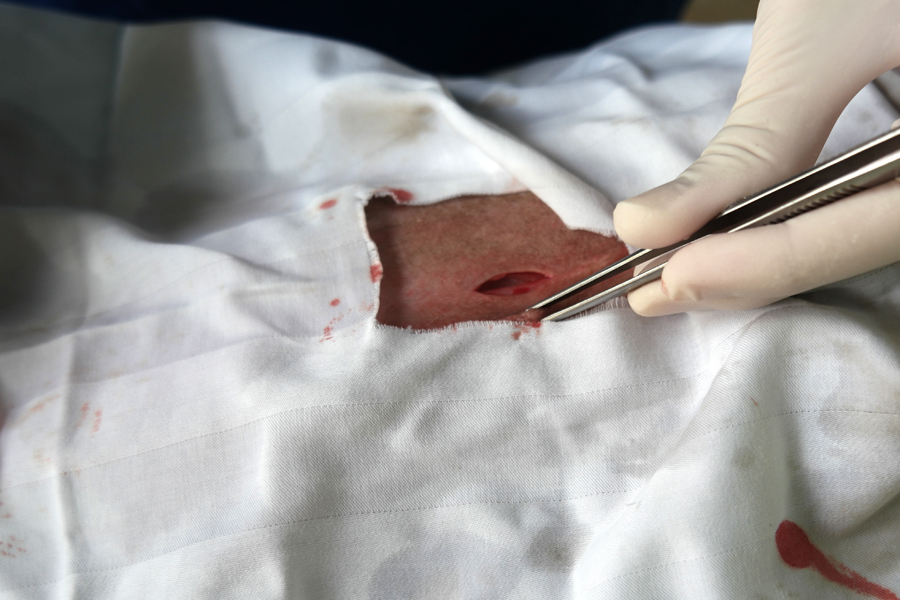 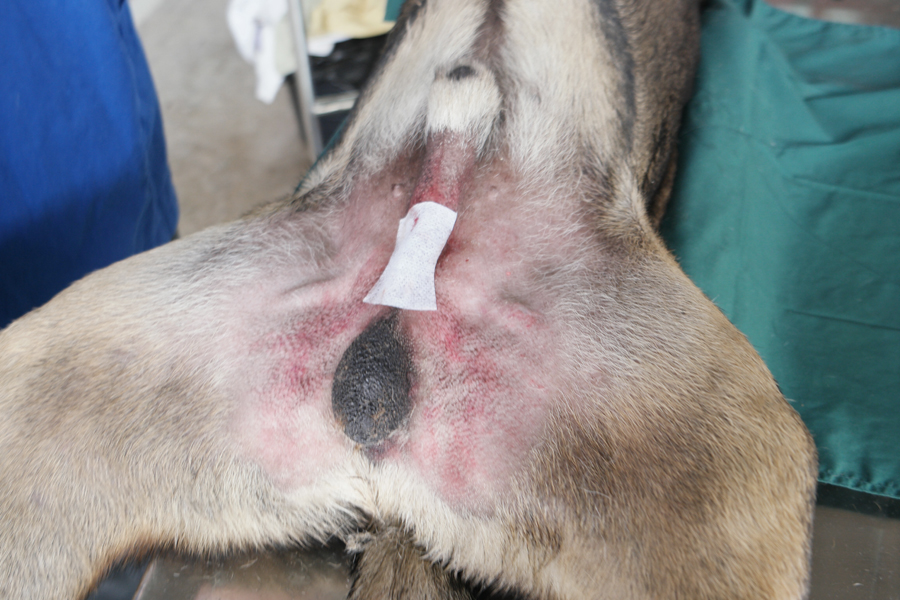 The dogs are then watched closely as they awake from the sedation, some dogs requiring re-hydration are put on a drip to ensure they recover well from the operation. After a few hours when the dog is alert they are returned to where they were picked up & re-united with their pack. 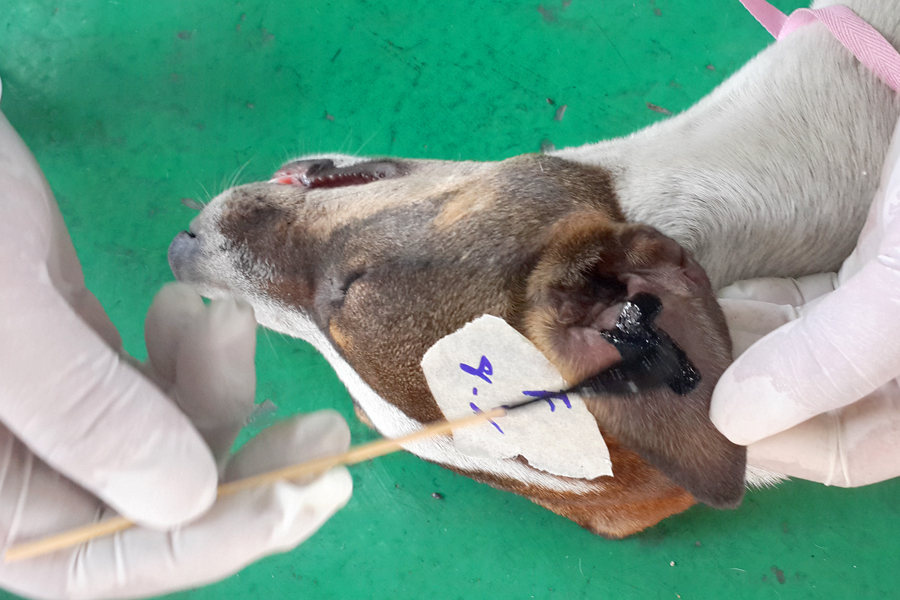 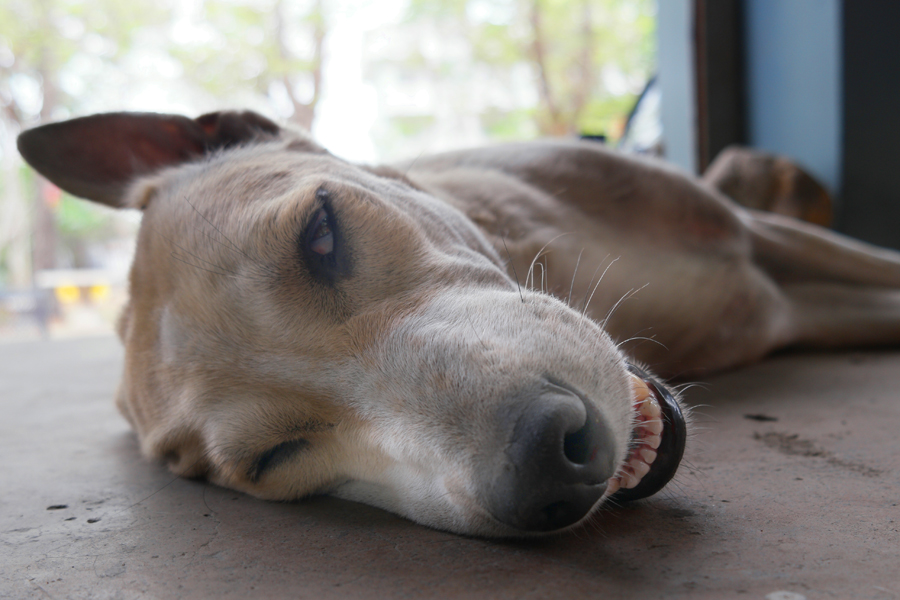 Local carers/feeders check on the dogs over the next few days to ensure there is no post-op follow up required. This CNR method reduces the cost of a spay neuter programs & allows for many more dogs to be sterilized. Each vet can perform as many as 30 operation per day & that can prevent up to 560 unwanted puppies in the next 12 months. Not bad for 1 days work, think how many that adds up to when this clinic runs several days a week.

These clinics are funded by “American Dog Rescue“, “K9Aid” & carried out by “Stop Strays Cycle” Thailand 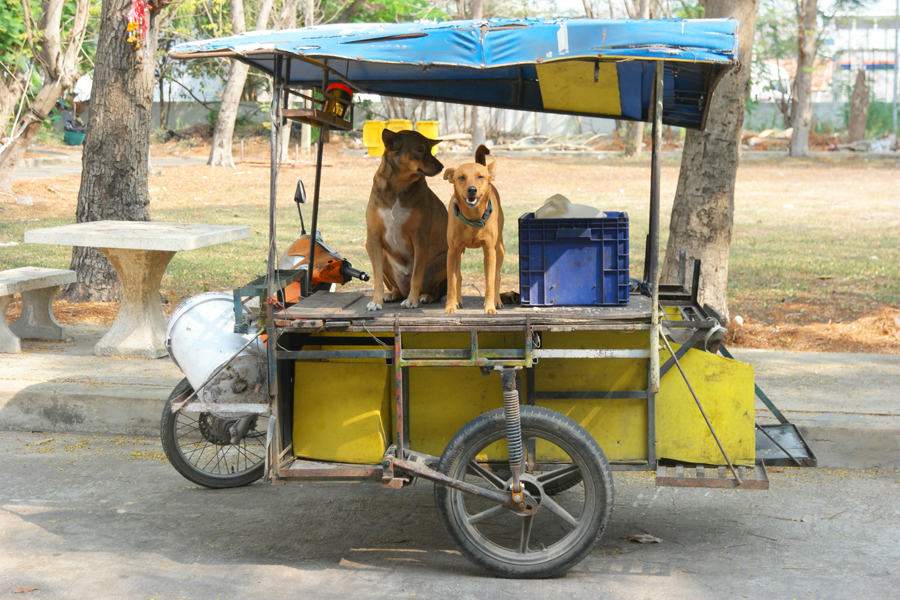 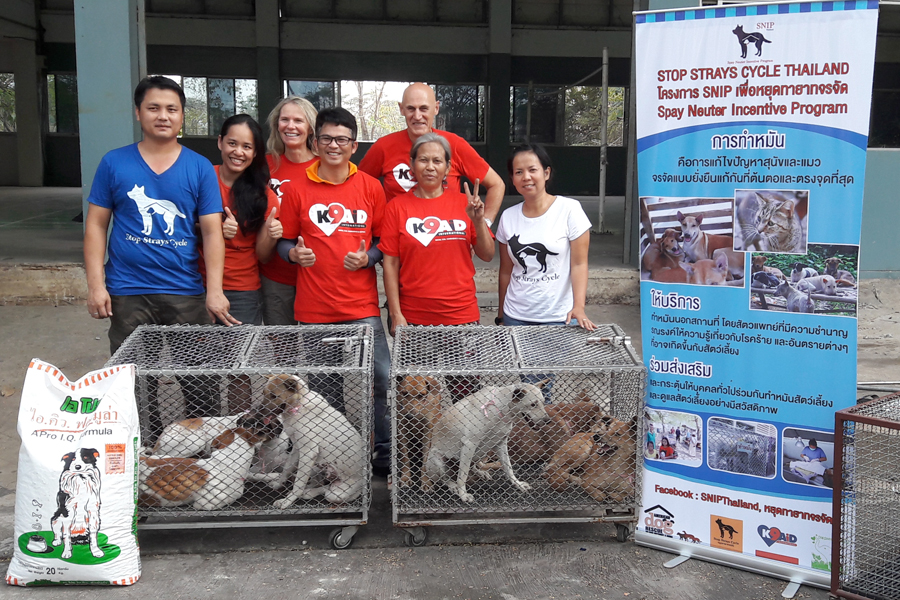 YOU too can help by signing up to the “SNIP” Program…