The VIETNAMESE ANIMAL AID AND RESCUE ORGANIZATION needs your HELP…

Vietnam is a country with no laws against animal cruelty, a country notorious for its dog and cat meat industry…

We set up the organization to help animals in need and provide them with the veterinary care and love they needed to thrive. Since then, we have realized that there is so much more to be done. We have seen cruelty, negligence, and ignorance. We have realized that Vietnam is a country with no laws against animal cruelty, a country notorious for its dog and cat meat industry but we have also seen hope. Many Vietnamese, most Vietnamese hate the very idea of dog meat, they love animals, we have a big battle to fight, we must be the voice for these suffering animals.
Emma Bolton & Cat Besch

“Ron’s” leg had been caught in a trap or snare,

as soon as we heard we immediately went to investigate further and assess the situation. We knew he couldn’t be left there and needed medical care straight away for any chance to save his foot. Luckily after a little persuasion Ron’s owner, who clearly loved Ron, allowed us to take him back to Hoi An for treatment.
When Ron was ready to go home we took him back up the mountain to go home. Yet when we arrived we realized this wasn’t a good situation for him. All the dogs in this area are running loose, many had been stolen or hit by trucks. Other dogs had missing limbs from the traps. We spoke to the owner who told us he had already lost 6 dogs, and he would much prefer that we gave Ron a safe, loving home.

Ron is the bounciest, affectionate dog you will ever meet. He will greet you with wet sloppy kisses and even though he will always have a limp and weakness in one foot it sure doesn’t stop him…

Emma came to Vietnam from her hometown of Essex, England just after graduating from the University of Canterbury with a degree in Forensic Science. She planned to volunteer as a teacher for several months. 6 years later Emma is a permanent resident of Hoi An. In her time in Hoi An she saw a problem and knew if she didn’t solve it no one else would. When she found a like-minded animal lover the rest was history. 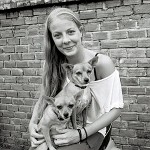 Emma manages over 40 cats in the cat home shelter. In the mornings and nights she provides care, love, and cleanup for the rescues, manages the organization’s finances, organizes volunteer scheduling, and taking calls for rescues, adoptions, and fosters. In the afternoons and evenings she holds a full-time job in a boutique in old town. She looks forward to opening the very first Cat Café, in Hoi An, which she and her fiancé, Phong, will manage.

A life-long animal lover and animal welfare advocate, Cat left the US 8 years ago giving up her life riding and showing horses and managing top level stables. Since graduating from American University in Washington, DC with a Bachelor’s degree in International Politics, Cat has lived in countries around the world. She has lived in Vietnam for two and a half years and plans to stay in Hoi An permanently. Since moving to Vietnam, Cat has become a vegan and encourages other animal rights advocates to do the same. She has found her calling here in Hoi An as  co-founder and looks forward to another 40 years of animal welfare capacity building in Vietnam. 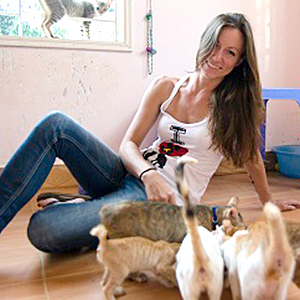 Cat manages the main shelter including the care, intake, and adoption of animals. She is also developing the vet training and capacity building program, as well as networking with other rescues to help build up their own administrative capacity in Vietnam. In addition to working at the shelter Cat is finishing up her Master’s degree in Emergency and Disaster Management with a focus on animals in disaster and working as a piano teacher in Hoi An.

MAKE A “ONE OFF” Shelter Aid DONATION…